A streaming speaker you can control (somewhat) without a smartphone 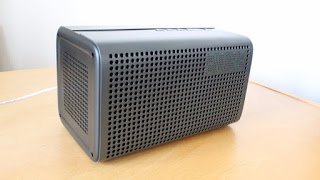 A streaming speaker you can control (somewhat) without a smartphone


The GGMM E3 is a new cloud streaming speaker that was shown off for the first time at CES last month. GGMM, a Chinese startup, promises that it can stream music from online music services without the need for another device, like a smartphone, to control it. Interest piqued, Gizmag took a look.

Unpacking the E3 reveals a not unsubstantial box measuring 20.5 x 12 x 12 cm (8 x 4.7 x 4.7 in). We reviewed the gray model, but it's also available in white and blue. A look at the box reveals perforations covering the front and the ends of the device with curved edges.

The speaker has a sleek and minimal look, though there are a couple of oddities. There's a slightly gaudy luminous green digital clock on the front, for example, formed of smaller perforations than those on the speaker grille. In addition, the speaker's status light is often a different color from the clock (blue in Wi-Fi mode, white in Bluetooth mode and green only in aux mode). Not a big deal, but given that they are the only two lights on the device, having them match depending on the status would have been a handy (and perhaps more aesthetically pleasing) touch.

We'd have preferred a small screen, which would have been able to display other information such as radio station or track info, in place of the digital clock, but that would have likely made for a much more expensive speaker. As it stands, to view such info, you have to use the accompanying mobile app – thereby requiring the secondary device you thought you didn't need.
In fairness, GGMM doesn't say that you can operate the E3 entirely without a secondary device, but, given that this is its main selling point, you'd think the speaker would be tailored as much towards this use mode as possible. In fact, the "deviceless" functionality simply means six presets (set using the app), which are then selected using a single button on the E3 itself, with no visual cues to help. Though that is more direct music control than you get on many other connected speakers, we think this makes the company's pitch somewhat misleading.
Setting up the E3 is pleasingly straightforward and quick. It comes with a power adapter (and an auxiliary cable, which is a nice touch) and once plugged in only requires you to input your Wi-Fi credentials via the app. Voice alerts confirm certain stages of the setup and advise whenever the device connects to Wi-Fi.

The luminous green clock is set manually on the speaker itself (since some of the speaker's functionality already requires an app, why not add this tedious task to the list?). There's also an alarm function, the noise of which is relatively inoffensive and melodic, but that can't be set to play any of the user's saved presets; that seems like a missed opportunity.
The app itself isn't exactly feature-loaded and looks a bit dated, but it is easy to navigate and use. A device list allows users to switch between and manage multiple GGMM speakers, as well as control multi-room play. There is also a simple "now playing" screen and a menu screen.
The menu provides access to the search function, the user's favorites list (which is different from presets) and a "my music" section. It provides access to the music apps Pandora and Spotify (which, of course, you'll need login credentials for) along with TuneIn and iHeartRadio. We weren't able to set anything as a favorite when using Spotify, though, and anything set as a favorite in TuneIn didn't appear in the favorites section – confusingly, we could only set those favorites in the "my music" section.

GGMM tells Gizmag that searching the "my music" section draws in results from all of the connected services. Many of the artists or songs we searched for weren't available, though, despite being available on Spotify. In addition, search results are categorized by "song," "album" and "list" (which looks like it means "playlist") but not by artist.
Pandora appears to load within the GGMM-E Series app itself, while Spotify is loaded externally as its own app and requires that the user choose the E3 as the output source via the Spotify app. There doesn't appear to be an option to log into an existing TuneIn account, meaning it's impossible to load any previously-created account settings or favorites.
In terms of sound quality, the E3 is very good. It has a frequency range of 70-20 KHz, a sensitivity of ≥85dB and outputs 40 W. That translates to plenty of volume, with good depth in the the bass and clear, sharp high-end. Unfortunately there is no way of adjusting the EQ settings, which is a bit of a shame, but as a day-to-day background listening device, the E3 kicks out a perfectly good sound and it would hold its own at a party.
When all's said and done, we find the E3 a bit frustrating. It has good build quality and sounds great, but its functionality still requires polishing. What's more, a streaming speaker that can be operated without a secondary device is a perfectly good proposition, but the only way it really moves in this direction, compared to rivals like Sonos, is in being able to scroll through presets with a single button.
The E3 is listed at US$129.99. There are plenty of similar devices you could get around this price-point and, at the moment, there's little that would make us recommend the E3 above its best rivals. That said, there's always the potential for the app to be developed and for more functionality and more refined functionality to be added. 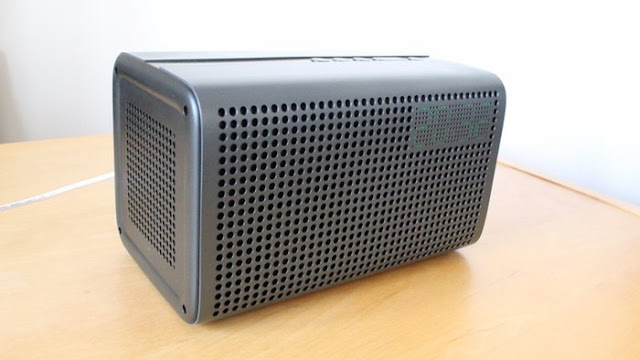