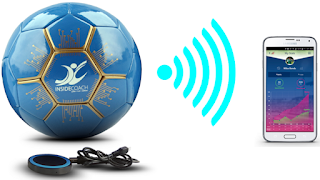 
Imagine having a coach in your soccer ball. That's essentially what InsideCoach says it has done, by creating a smart soccer ball that can monitor a player's skills, track progress, provide tips on how to improve, and make practice more interesting.

The Inside Coach smart soccer ball looks and behaves like a regular soccer ball, and comes in a regulation size 4 for kids ages 8 to 12, and size 5 for ages 12 and up. Sensors inside the ball detect and record such variables as how hard the ball is kicked, the amount of spin, the distance and trajectory of the ball after the kick, and the number of passes and touches. The results are displayed on a smart device connected to the ball via Wi-Fi, using an accompanying iOS or Android app.
A user wearing a set of headphones (not included) connected to their mobile device will hear a coaching voice from the app, either encouraging them with phrases like "that was your best shot" or giving them instructions on specific moves like "go right" or "scissor kick."

The company says it is also developing a series of 10 short tutorial videos which will be embedded in the app, that cover specific skills. The app will additionally let the user share their performances with friends, family and other players anywhere in the world, as long as they have access to the same app.
The smart soccer ball is designed to be weather-resistant, but it's not recommended for extended play in the rain. A single charge lasts about four hours, and the ball can be recharged in about an hour by placing it on an accompanying charging plate.
The company states that it spent three years developing the smart soccer ball, and incorporated input from parents, coaches, competitive clubs and players from ages 8 through high school. The intent, it said, was to not only improve young players' ball handling skills, but to keep kids playing by making practices be more like the interactive video games they play indoors. A gamification element lets young players challenge each other by comparing their results in real time.
In the recent past, other companies have introduced variations of a smart ball. These include the Adidas smart soccer ball and the 94Fifty smart basketball.
InsideCoach recently began a Kickstarter program to raise US$25,000 to help bring its ball to market. Early bird backers can purchase the InsideCoach smart soccer ball and charger for $99, with delivery expected by the end of 2016 if all goes as planned. 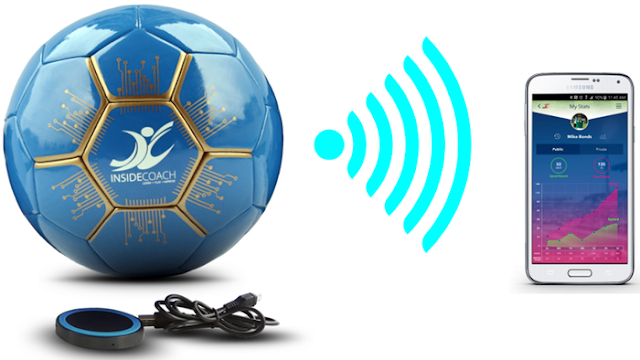