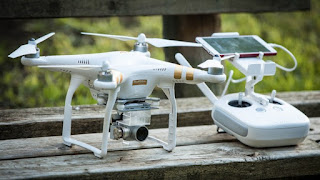 
China’s DJI made a gutsy move with the release of the Phantom 3. The Phantom 2 Vision+ was already more or less unchallenged as the best prosumer-level all-in-one camera drone on the market, while the Inspire One offered a clear step up for early professional users. The Phantom 3 could easily have been an incremental upgrade, but instead it got a complete overhaul, to the point where the Professional model now actually looks better than the Inspire One in some areas, for less than half the price. We’ve picked up a Phantom 3 Professional to go along with our old Vision+ review unit, so let’s take a very critical look at the new big kid on the block.

The Phantom 3 might look almost the same as the Vision+, but there have been some big changes. Gone is the piddly low-res transmitter, in favour of a superior DJI Lightbridge unit that streams video back to your controller in 720p, Where the Vision+ sent back a horrible, blocky low-res feed, the P3 lets you really see what you're doing.

Stability in the air is noticeably improved with the upgraded GPS system, as well as an added GLONASS unit (Russia's version of GPS). There’s a downward facing camera and ultrasound unit, just like the Inspire’s undercarriage, that gives you improved stability close to the ground and is claimed to make it much easier to fly indoors. In practice, the Phantom 3 hovers very stable outdoors, even in a fairly strong coastal breeze, and the visual positioning system does indeed make it a lot more stable indoors – unless you’re over carpet, which to be fair is a lot of indoors.
The Phantom 3 is a little more responsive in the air than the Phantom 2, but the experience of flying one is pretty similar, which is no bad thing since the old Phantoms were already smooth and easy to fly. Top speed remains about 60 km/h (37 mph), which is good enough to have a decent crack at shooting a car or motorcycle in motion, but around 20 km/h (12 mph) down on the Inspire One.

The hand-held controller is now the same as the Inspire’s and connects to a smartphone with a USB cable instead of a Wi-Fi signal, so it’s a fair bit easier on your phone battery. There’s also a bunch of extra buttons, including a return-to-home button and a bunch of camera control gear that now lets you start and stop video, and take still shots when you don’t have a phone or tablet connected – very handy when batteries run low. Additionally, the new phone/tablet holder can extend to carry a small 7-in tablet, if not a full sized iPad.
Little has changed in terms of flight modes. You’ve still got P mode for full GPS/GLONASS/VPS stabilization, which is where many Phantoms will spend most of their time. A (attitude) mode switches off the GPS and VPS gear and allows the drone to drift, which can result in smoother shots if you’re finding the drone is correcting itself too roughly in P mode.

Switching to F mode will only make a difference if you’ve pre-enabled Intelligent Orientation Control (IOC) in your flight settings. Right now, all it lets you do is enable Course Lock mode, which for want of a better description separates directional control from which way the drone is pointing. Forward on the right stick will always move in the direction the Phantom was pointing when you turned it on, or when you reset the IOC. This is a really nifty tool if you’re trying to, say, follow a car. You can go top speed alongside the car while rotating the camera to keep it in view and frame your shot without having to correct your direction stick to account for a change in orientation. Hard to explain, but it makes sense quickly when you fly it.
A future update will enable Home Lock mode, which will permanently orient the drone’s directional controls so that backwards always points to the spot it took off at, and a new Point of Interest mode, which will automatically circle a GPS point at a fixed distance while keeping the camera centred on it for a nice circling shot. The Phantom 3 also retains the old model's ability to fly along a pre-programmed route that's programmed visually in the app.

Stability and range be damned. The camera is probably the most significant upgrade from a Vision+ owner’s point of view. It's basically the same as the Inspire’s, packing a rich, 4K ultra high-def Sony EXMOR sensor and processor that shoots DNG RAW stills. The lens is the same 20 mm f/2.8, which cuts down markedly on distortion from the old Vision+ lens. It’s mounted on a very effective 3-axis gimbal that corrects pitch and yaw instantaneously, and smooths out yaw movements.
Like the Inspire, control of the camera is now through the DJI Pilot app, which is a vast improvement on the DJI Vision app. You’ve now got full manual control of the camera, and access to a stack of other flight settings that were previously only accessible by plugging the Phantom 2 into a laptop.

When it comes to shooting stills, the P3 is a clear market leader. It beats a Phantom 2 with a GoPro on board due to the fact that it shoots in RAW, and you can see what you’re doing as you compose and shoot. The RAW images process up well in Lightroom. We’ve got our best results exposing to save the highlights, then bringing up the shadows. You’ve got a fair bit of leeway to lighten up dark areas before things get too noisy.
If you’re shooting a scene with a flat horizon, you’ll still notice a fairly marked bump due to wide angle distortion, as well as a fair bit of colour fringing, neither of which show up in DJI’s heavily processed sample images… Fancy that! Both of these disappear as soon as you tick the Profile Correction box in Lightroom CC, which now has a built-in Phantom 3 profile – just don’t be surprised if your horizons are distorted straight out of the camera.

One very odd issue with RAW stills is that they seem to come out of the camera with a ton of hot pixels in them – hundreds of little white spots you can see on every photo in the same places. This is normally a symptom of a sensor that's had a hard life, but DJI is obviously aware of the problem because you can download a "DNG Cleaner" app from the Phantom 3 website.
Once we ran our photos through this app and stuck them back into Lightroom, the hot pixels were gone. This app is also supposed to make the DNG files "more compatible" with RAW editors. which is handy to know, as they simply wouldn't open in Lightroom on my home computer, even though it's the same software as I run in the office. Why this "cleaning" algorithm can't just be built into the camera software, I have no idea.
Video quality on the Phantom 3 Professional is at once vastly better than the Vision+, and also a bit disappointing. On the plus side, 4K resolution is absolutely massive, and brings out some beautiful details.
On the other hand, those distortion and chromatic aberration issues are still there, and much more annoying to correct for in post production. Dynamic range drops markedly in video, even in the flattish LOG colour mode, meaning that the Phantom 3 struggles with shooting in harsh light or towards the sun, and you get some high speed shutter banding when things get really bright.

Auto exposure correction does a pretty good job most of the time, but it’s very noticeable as it steps through shutter speed and ISO settings, so you’ll want to shoot in Manual mode if you want to avoid that. Histogram and zebra striping options help out in that case.
When the light’s good, your shots look great, but the same can be said for just about any camera. The GoPro cameras seem to fare a little better when the situation gets less favourable, even if you have less control over their output, and you’re stuck with the way-too-wide-for-most-things 170-degree camera angle if you want to shoot in 4K on a GoPro.
All these issues are present when shooting with the Inspire One, but the Phantom 3 adds one extra problem. Without the ability to pull its legs up out of the way, you’re going to get some propellers and landing gear in your shots. It’s worth keeping that in mind as you angle your camera and compose a moving shot.
We’re being very critical here, but although the P3 is streets ahead of the rest of the market right now, this space is going to get crowded in the next few years and video quality is an area that could definitely improve. While the Inspire’s camera is removable and replaceable if DJI comes up with something better, you’ll likely have to toss the whole Phantom 3 in the bin to upgrade it in the future.

If you’re a licensed operator that needs to log flights, the P3 gets the same automatic flight logging system as the Inspire, including battery use logging.

On the topic of batteries, the new LiPo cells charge significantly faster than the batteries on the Vision+, going from 20 percent to 100 percent in around an hour. What’s more, since LiPos don’t like staying charged for long periods of disuse, the intelligent batteries slowly discharge themselves back down to around 60 percent if you don’t use them for 10 days or so, in order to increase their service life.
The batteries and controller charge off separate connections from the same charger, which would be really cool, except you're not supposed to plug them both in at the same time. 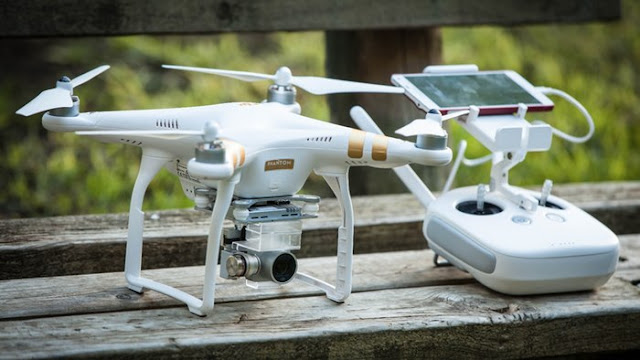