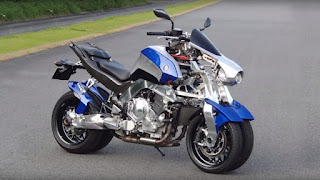 
While its MWT-9 three-wheeled concept was making headlines at the 44th Tokyo Motor Show last week, Yamaha discreetly released a video of another similar prototype it has in development. The OR2T has four wheels and suspension technology evolving from the 2007 Tesseract concept model.

When Yamaha unveiled the Tesseract four-wheeled concept at the 40th Tokyo Motor Show in 2007 the market of leaning multi-wheeled vehicles (LMW) was just hatching. Piaggio had just introduced the MP3 in 2006 as a unique scooter with an intricate suspension system that allowed the two front wheels to tilt while cornering.

Since then several other manufacturers have followed suit, with Swiss company Quadro and French Peugeot each joining the club with their own designs. A common denominator for Yamaha, Piaggio and Quadro was the Italian Studio Marabese Design that had conceived all three different front suspension setups – and actually owns Quadro. The latter also ventured into four-wheelers with the Quadro 4, which is still the only four-wheeled LMW in production.
Yamaha responded in 2013 with the Tricity three-wheeled 125 cc scooter, which featured a new suspension concept that was quite different from every other LMW contraption, including the company’s own Tesseract. Another year on and the Tricity went into production, and was an instant success in Europe.
The MWT-9 concept that Yamaha unveiled last week in Tokyo is more or less another take on the Tricity setup, sporting wider wheel track and a massive arm to control the four forks that suspend the front of the bike. Powered by the 847 cc inline triple-cylinder engine of the MT-09 (FZ-09), this concept was designed as a large sport touring LMW – one might also say it’s a direct response to Honda’s Neowing concept.
What Yamaha is teasing us with now, though, is much more than a MWT-9 with a fourth wheel. In fact the OR2T development prototype brings forth a suspension arrangement that we hadn’t seen again since the 2007 Tesseract concept.

Instead of having suspension units on each wheel controlled centrally by a swing arm, here we have a huge vertical arm per wheel connecting it to its own independent shock absorber and linkage. As an evolution of the Tesseract’s design, the centrally-positioned shock of the 2007 concept model has been substituted by two shocks, one for each wheel.
The OR2T is referred to as a research and development prototype, as the video that Yamaha has just released offers a glimpse of this LMW during testing. Powered once again by what appears to be the MT-09 triple, this new prototype sports a considerably smaller wheel track in comparison to the Tesseract. The rear setup is not visible in the video and accompanying images, neither is it explained in the few words that Yamaha has on offer. Judging by what we can extract from the available visual material, it probably retains the same central shock absorber architecture of the Tesseract.
What we can say with certainty, though, is that Yamaha now has two different LMW technologies in development, one already in production and another on the way. Both the MTW-9 and the OR2T concepts are much more than 3D renders or exhibition mock-ups; they are fully working prototypes. 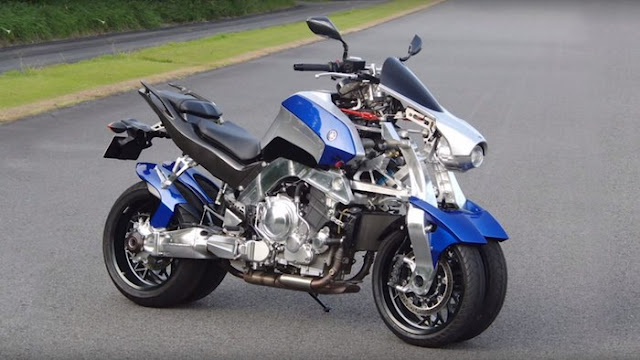