Home » news » Veemo velomobile could be yours to use, for 28 cents a minute

Veemo velomobile could be yours to use, for 28 cents a minute 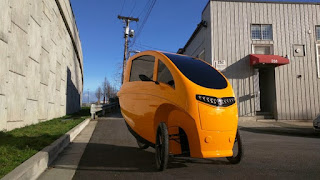 Veemo velomobile could be yours to use, for 28 cents a minute


While bicycle-sharing services can come in very handy, not everyone wants to pedal a bike everywhere they go. Car-sharing co-ops are certainly one alternative, although they require users to have a driver's license. That's where VeloMetro comes into the picture. The Vancouver-based startup is developing a point-to-point service that will allow users to rent a sort of e-bike/car hybrid, known as the Veemo.

"There have been studies that have shown that up to 60 percent of a city's population would like to cycle more, but they don't for reasons such as not wanting to get into cycling attire, not wanting to wear a helmet, or worrying about their bike getting stolen," VeloMetro co-founder Kody Baker tells us. "We've designed a vehicle and a service that addresses all of those issues."

The Veemo is what's known as a velomobile – a tricycle enclosed in an aerodynamic body that provides protection from the elements. Although users do pedal it, their pedalling power is augmented by a built-in electric motor, taking the trike up to an electronically-limited top speed of 20 mph (32 km/h). If that top end were any higher, the Veemo would be classified as a motor vehicle, and users would require a license.

Because it's enclosed, riders don't need to wear a helmet or much in the way of cold/wet-weather clothing. The electric-assist feature also means that they're not likely to work up much of a sweat while using it, so they don't need to plan on changing clothes upon reaching their destination. That said, fitness-conscious users can choose to have the motor provide a lower amount of assistance for more of a workout.
Other features of the vehicle include a composite monocoque body with integrated crumple zones, an aluminum composite sandwich frame, an automatic transmission (including a reverse gear), hydraulic disc brakes, and a full LED lighting system. The target weight of the final client-ready version is 120 kg (265 lb), and its lithium battery pack should have a range of about 100 km (62 miles) per charge.

To make the sharing service as simple as possible, users won't need to opt into any sort of ongoing membership. Instead, they'll just use their smartphone to sign a Veemo out from a nearby VeloMetro lot (on a major credit card), when and wherever needed. As they near their destination, an internet-connected dashboard tablet will show them the locations of motorcycle parking spots close by, along with other drop-off locations.
All told, plans call for users to pay a flat rate of CAD$0.28 (currently about US$0.20) per minute.
"We're working with the City of Vancouver to get a few vehicles in with their private city staff fleet, so they're going to be our early beta testers," says Baker. "Then we'll have a pilot fleet out at the University of British Columbia, for students and staff to ride around campus."
The first Veemo-sharing service for the general public should subsequently be rolled out in Vancouver sometime next year, with other Pacific Northwest cities to follow soon after. And if you want a Veemo of your own, there are plans for individual sales to commence sometime in the future. 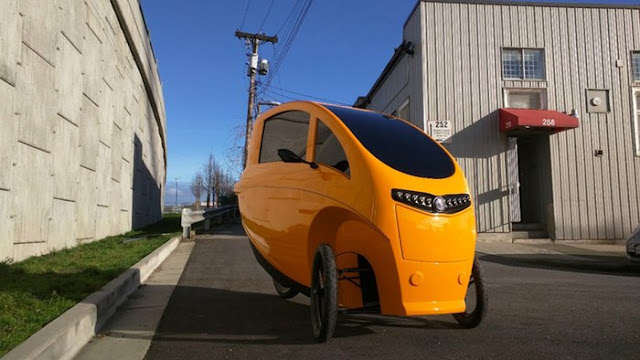