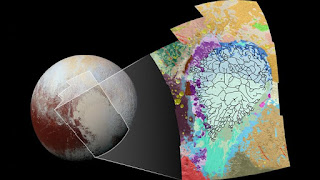 
Using data harvested by the New Horizons spacecraft over the course of its July 14, 2015flyby, NASA scientists have compiled a geological map of a vast swathe of Pluto's surface. It is hoped that maps like these will aid planetary scientists in unlocking the evolutionary past of the enigmatic dwarf planet.

From the first images returned by New Horizons, scientists have been shocked at the sheer range of geological diversity discovered by the probe. In order to make sense of the dizzying array of disparate landscapes and features, and how they may be connected to one another, planetary scientists at NASA are developing surface maps.

The newly-constructed map covers a vast swathe of Pluto's surface measuring 1,290 miles (2,070 km) from top to bottom. Twelve base images captured by New Horizons' Long Range Reconnaissance Imager (LORRI) were combined to provide an average resolution of roughly 1,050 ft (320 m) per pixel or better, over which scientists have overlayed colors designating specific geological characteristics and phenomena.
Included in the center of the map is the unusual cell-like terrain that characterizes the informally named Sputnik Planum. Bordering this region to the north in purple are mountainous regions, and towards the bottom of the map is a red mass, which represents a potential cryovolcano known as Wright Mons.
The scientists say that studying the way the boundaries between unit crosscut one another will allow them to build up a relative chronology of the formation of the different units. This is useful for determining which geological processes have occurred on Pluto and when they occurred relative to one another. 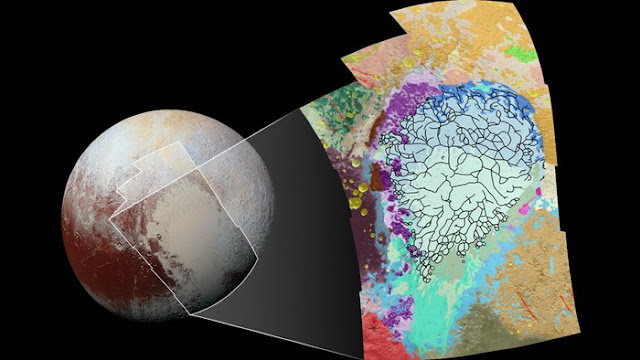