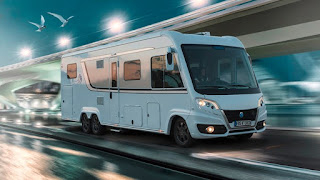 
The 2016 Knaus Sun i doesn't have the smooth, fluid style of the Caravisio, but Knaus' new flagship motorhome does share some high-tech inspiration with that 2013 caravan concept. Billed as the "best Knaus ever," the luxurious motorhome is packed with features and options, including smartphone lighting control and a slide-out outdoor TV with Bluetooth audio.

Knaus says the Sun i was designed with a philosophy of "the best of everything and always a bit more than you actually need." Nothing better exemplifies that philosophy than the innovative optional features.
Our favorite option is easily the outdoor entertainment system, which includes a pull-out 32-in TV with two neatly docked sets of Bluetooth headphones. The pavement-centric Sun i won't bring your entertainment to the remote areas that the EarthRoamer XV-LTSwill, but it'll still set you up for some serious TV viewing under the sun.

The outdoor TV isn't the only innovative entertainment feature. With the available electric retraction system, the optional indoor television slides neatly behind the bench seating, popping out at the push of a button. It's there when you want it, out of sight when you don't.
Another interesting option, which Knaus declares a never-before-seen first, the extendable under-floor storage bin rises 16 in (40 cm) at the push of a button, bringing its contents right to you. That bin is located in a kitchen area that also includes a three-burner stove, stainless steel sink, 190-liter refrigerator, slate worktop, and a series of shelves that showcase your kitchen provisions like part of the decor.

The Sun i's central multi-area bathroom includes a shower room, vanity sink and Dometic toilet. The shower is enclosed with rounded glass.
Like the Caravisio and the Eurostar that followed, the Sun i has yacht-style flooring underfoot. Other materials include a textile ceiling liner and slate-look dining room tabletop.
The Sun i has Alde hot water heating, up to 180 liters of fresh water capacity, 170 liters of waste water capacity, and two 95Ah AGM batteries. The extensive options list includes air conditioning, various entertainment packages and components, a gas oven and an alarm system. When the optional WLAN is added, the interior LED lighting can be controlled via smartphone.
The Sun i debuted at last year's Düsseldorf Caravan Salon and made an appearance at the CMT show last month. It starts at €97,400 (approx. US$109,000). Knaus tells us that it will showcase four additional floor plans at this year's Düsseldorf show, which starts in August. 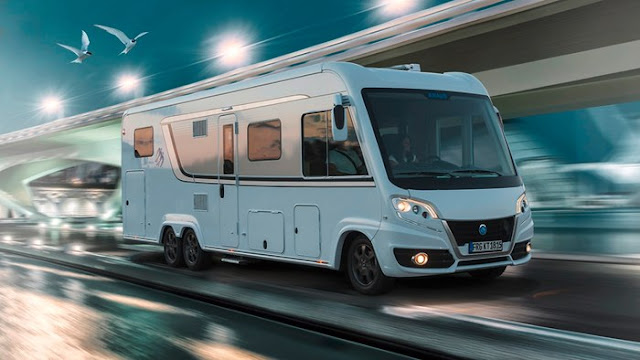