Spinning up artificial capillaries with a cotton candy machine 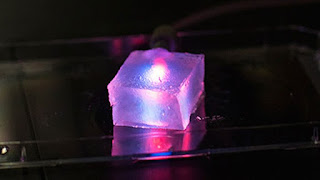 Spinning up artificial capillaries with a cotton candy machine


From growing a full thymus gland inside a mouse, to creating a slice of artificial liver tissue, to using ink jet printing technology to create a human ear, researchers are steadily moving us toward the day when ordering up a new organ could be as commonplace as ordering an MRI is today. One of the hurdles in creating lab-grown organs, though, is that the cells in such a structure need a way to receive nutrients. Researchers at Vanderbilt University (VU) may have just leaped that hurdle using a most unexpected tool – a cotton candy machine.

Leon Bellan, an assistant professor of mechanical engineering at VU, has actually been tinkering with cotton candy machines for some time after realizing the machines were perfect at spinning out tiny threads that resembled human capillaries.
"I went to Target and bought a cotton candy machine for about US$40," Bellan said. "It turned out that it formed threads that were about one tenth the diameter of a human hair – roughly the same size as capillaries – so they could be used to make channel structures in other materials."
The issue, however, is that if the threads are spun out of sugar, if attempts were made to implant them in a hydrogel that's used to grow organ tissue, they'd simply dissolve as soon as the gel touched them. What was needed was a substance that could hold up against the water-based gel initially, and can then be triggered to dissolve after the gel is in place, leaving behind tiny channels.
Bellan and his team found that a polymer called PNIPAM – or Poly (N-isopropylacrylamide) – was the perfect material for the job as it is only soluble below 32° C (90° F). To take advantage of this property, the researchers spun out some PNIPAM threads using a machine very similar to a cotton candy machine, then immersed them in gelatin, which was kept warm in an incubator set at 37° C (99° F). Once the gelatin had set, it was cooled to room temperature, which caused the threads to dissolve, leaving behind tiny tubes.
Those tubes were then pumped full of cells along with the nutrients they needed to grow. Bellan reported that after a week, 90 percent of the cells in the tubes were alive and functional.

This method has a distinct advantage over another common method of creating capillaries in gels, known as the "bottom-up" process. In such a process, cells are cultured in the gel and eventually spontaneously grow their own capillaries. But the process takes time, which means that new layers can't be placed into the budding tissue before the capillaries are formed because there's a chance the cells in the middle of the structure could die off.
Because Bellan's method, known as a "top-down" approach, can form the capillaries all at once, thicker tissue structures could theoretically be possible.
"Some people in the field think this approach is a little crazy," said Bellan, "But now we've shown we can use this simple technique to make microfluidic networks that mimic the three-dimensional capillary system in the human body in a cell-friendly fashion. Generally, it's not that difficult to make two-dimensional networks, but adding the third dimension is much harder; with this approach, we can make our system as three-dimensional as we like."
Bellan and his colleagues are now looking into ways to tailor the process to mimic capillaries in various types of tissues. "Our goal is to create a basic 'toolbox' that will allow other researchers to use this simple, low-cost approach to create the artificial vasculature needed to sustain artificial livers, kidneys, bone and other organs," he said.
And how does a man who's spent so much time around cotton candy feel about the sticky substance? "People always ask if I like cotton candy," he says in the video below. "I think it's kind of disgusting." 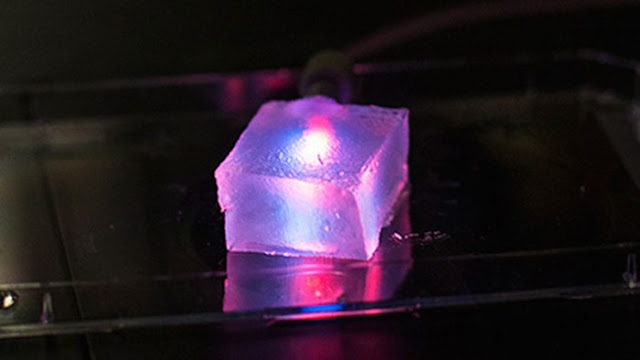