Snake robot learns to climb sand hills better, by moving like a sidewinder 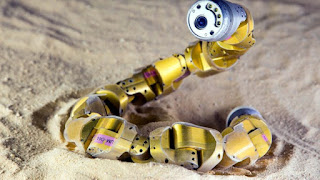 Snake robot learns to climb sand hills better, by moving like a sidewinder


If a robot is looking for victims at a disaster site, or even exploring another planet, then it certainly better not get stuck in the sand. That may now be a little less likely to happen, as scientists recently studied one of the best sand-travelers in the animal kingdom – the sidewinder rattlesnake. After they analyzed its movement patterns and applied them to an existing snake-inspired robot, that robot was better able climb up sandy inclines.

The sidewinder is widely known for its ability to quickly undulate across the sand in a sideways orientation. Carnegie Mellon University's snake robot, on the other hand, traditionally hasn't done quite as well – in a 2011 archeological mission in the Red Sea, it couldn't move up sandy slopes in caves.
Fortunately for CMU, researchers at the Georgia Institute of Technology and Oregon State University recently became interested in using the robot to help themselves understand just what it is that allows sidewinders to move so well. In order to do so, they started by setting up a sloping sand-filled enclosure at Zoo Atlanta, then got six sidewinders to climb from the bottom to the top. By analyzing high-speed video of the reptiles in action, the subtleties of their movements became easier to discern.

In particular, it was noted that the snakes climb by moving their bodies in two independently-controlled waves. By continuously adjusting the aspect ratio of those waves, both vertically and horizontally, they can control what parts of their body are in contact with the sand. The steeper the slope, the more the total contact area.
When that pattern was programmed into the robot's movements, it was able to climb slopes that would have previously been impossible for it to manage.
"This type of robot often is described as biologically-inspired, but too often the inspiration doesn't extend beyond a casual observation of the biological system," said Carnegie Mellon professor of robotics, Howie Choset. "In this study, we got biology and robotics, mediated by physics, to work together in a way not previously seen." 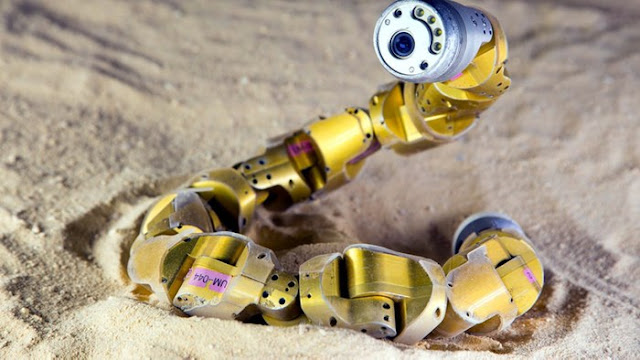