Smart vehicles get even smaller with all-electric smart escooter concept 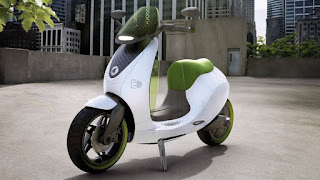 Smart vehicles get even smaller with all-electric smart escooter concept


Daimler’s smart brand has managed to reduce the size of its already micro-sized vehicles even further by subtracting a couple of wheels and unveiling a concept scooter. The chassis of the all-electric smart escooter is modeled on the tridion safety cell of the smart fortwo, with its steel and aluminum frame clad in fully interchangeable plastic body panels. The scooter has a top speed of 45 km/h (28 mph) with power provided by a 48-volt lithium-ion battery pack with a capacity of 80 Ah that gives the vehicle a range of up to 100 km (62 miles).


The electric scooter is driven by a 4 kW disc-shaped wheel hub motor in the rear wheel, which transmits power directly to the rear wheel via a brushless direct current hub drive that smart says is clean and maintenance-free. Because full torque is available right from the start the escooter should be quick off the mark and able to easily outpace most cars when taking off from a set of traffic lights.
It can be charged at any standard household power socket within three to five hours via the charging socket at the front of the scooter hidden away underneath a hinged smart emblem, while the charger itself is integrated in the scooter. Additionally, solar cells on the front of the escooter help recharge the battery whenever the sun is shining. The scooter’s lithium-ion batteries are placed behind the paneling in the foot area and provide a low center of gravity and mass centering to improve agility and stability.

Because the frame of the escooter doesn’t only house technical components, such as the engine, battery or power electronics, there is plenty of additional storage space. Underneath the seat there is a lockable stowage space with enough room for both the driver’s and the pillion rider’s helmets.

A fold-out seat provides room for two, with the footrests for the pillion passenger automatically moving into position when the second set is folded out. If, instead of an extra rider, you’d prefer extra storage space, the pillion seat can also be replaced with a luggage rack.

Safety features include an anti-lock braking system (ABS) specially adapted for a two-wheeler and an airbag integrated in the paneling beneath the handlebars. Blind Spot Assist draws the rider’s attention to vehicles following close behind in the “blind spot” through the flashing of a triangular light in the rear-view mirror. The edges of the foot protection on the front paneling feature illuminated side markers that improve visibility from the side and also act as indicators.

Hitting the brake retards both the front and rear wheels simultaneously – the front wheel mechanically with a hydraulic disc brake and the rear electrically. When the hydraulic disc brake at the front is actuated, an anti-lock braking system kicks in with the wheel hub motor becoming a generator to provide resistance and convert braking energy into electrical energy that is stored in the scooter’s battery.
The escooter also puts the rider’s smartphone front and center with a specially designed mount in the center of the handlebars. When a smartphone is placed in the mount it is fully linked with the scooter and serves as the vehicle’s control and communication center. The smartphone will act as a starter and immobilizer, with the escooter being rendered inoperable if the smartphone isn’t sitting in the mount – which begs the question as to what happens if you lose your phone.

The smart drive kit app allows the rider to use online services when making stops on the road and, during the journey, it serves as the scooter’s speedometer. It also displays the range and battery charge level and acts as a navigation system. Additionally, the “GPS Tracking” smartphone app will help users track down their escooter if they forget where they parked. The handlebar heating can also be controlled remotely using the smartphone, presumably so you can warm them up on cold days before reaching the vehicle.
The smart escooter will be making its world premiere at the 2010 Paris Motor Show, so we’ll be sure to have our man on the ground there drop by to check it out. 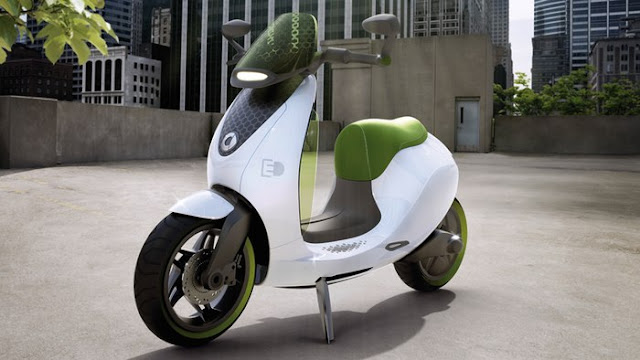