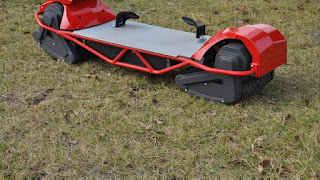 
Two years ago, we had a look at the Scarpar- a twin-tracked, high speed all terrain powerboard that seemed like a promising power toy. Well, we've just spoken to Scarpar CEO Andrew Fern, who has confirmed that this unique vehicle is going into production later this year, and he's taking deposits as of now. Basically everything on the board has been changed since the last prototype we saw - it now runs an independent electric motor in each of the two articulating tracks, and the hand-held throttle and brake unit is now wireless. And as Fern describes after the jump, getting it to a production-ready point has been a herculean effort; his design team more or less had to create their own realm of engineering theory to deal with such an unprecedented set of vehicle dynamics. The following interview is a fascinating look into the development cycle of a new product. Most importantly though, the Scarpar still looks like extreme fun, and a remarkable way to launch yourself into the foliage.

It seemed like such a simple idea when we first looked at it - a tank-style track at each end of a skateboard, combining the fun steering and carving of a skateboard with all-terrain drive capability and the ability to reach high speeds. The Scarpar is a hard device not to like at first glance.

But CEO Andrew Fern found that consumer enthusiasm doesn't necessarily translate itself into capital in this day and age: "When you've got a device to take to market, venture capital and angel capital are noticeably absent. Everybody's looking for the next Twitter or Facebook or whatever, but if you've got a physical device, it's a pretty tough slog."

So, armed with a small team and a "bootstrap" budget, Fern has taken longer than expected to push the project toward a commercial reality. Based in Queensland, Australia, he engaged aerospace/automotive specialists EDAG as his engineering partners and set them to work on turning the Scarpar prototype into a safe and well thought through product.
But the engineering process proved far from straightforward: "It has been a lot more complex and difficult than even EDAG estimated it could be," says Fern, "I mean, how hard can it be? It's just a board with tracks and a motor, and the tracks articulate. But when you get down to it, OK, what are the losses in the system, and how much torque do you actually need to turn those tracks - and by the way, where are those tracks going to come from? Because they don't exist. So every part has to be made.

"The tracks themselves are a really good example of the engineering challenges. The tracks are basically a one meter continuous loop, the equivalent of a timing belt. But a timing belt is not designed to be bashed from the outside ... We needed the precision of a timing belt, but we needed the ability to take a hit from the outside of something like a snowmobile track ... Now, a snowmobile has no constraints in terms of weight, they have a huge amount of power, so they don't have to build things light. Whereas we're trying to build a track that weighs a couple of kilos, that can run at 50 km/h, and be bashed from the outside, and is still precision enough to make the losses very low so we can actually power the thing... The engineering challenges with making something like this lightweight are really significant."
Last time we checked, the Scarpar prototype was running on a 2-stroke petrol engine - but in the process of getting it production ready, this has changed to two electric motors, one in each articulating track.
Why electric? Two main reasons, says Fern. "Two stroke is really the only way to get the power to weight ratio in a combustion engine that we need, and two-strokes are just about illegal in California. Also, there's a lot of pressure on off-road in general to be a bit environmentally sensitive and aware. We think that, going electric straight away, it's hard right now, just because of the issues with battery capacity and those kinds of things. But we think in the long run it'll pay. We're building a company for the future, not something we could've built 25 years ago.
The other reason is the using electric motors greatly reduces the mechanical complexity - and thus the potential points of failure on the device: "One of the issues we had with the combustion engine was that we had a very complex drive train. Because the tracks were articulating, and we were running from a static crankshaft, we had to have ways of allowing that mechanical power to actually move in an odd pattern. We were using splined shafts, we tried all kinds of things to deliver the minimum amount of losses and maximum reliability.

"Because the motors are mounted on the tracks now, the power is basically direct. Which is awesome for us because the losses in the system have come down significantly. So the losses have come down a lot, and the complexity has come down a lot too. If you'd had a look at the old vehicle and said 'which bit's gonna break' you'd have looked at the drivetrain and said, 'well there's a lot of bits there. There's a lot of things that could go wrong.' So in terms of commercial reliability, in being able to ship it and say we'll give you a one year warranty, that's been a significant step for us."
If the idea of electric power sounds like a bit of a petrolhead turn-off to you, you're not alone. In fact, Fern's chief product tester Darren Powell, who holds the current world speed snowboarding record at 202 km/h (125 mph), was pretty lukewarm on the idea at first too. As fern puts it: "Darren thought 'yeah, the electric motors, they're the things they put in wheelchairs' - but he was quite frightened by it when he first squeezed the trigger and went 'aw shit!' Yeah, it's an unbelievable amount of power. The two motors have about 13 or 14 newton-meters of torque. You have effectively 100% of torque from zero. I reckon there'll be a few people be pretty surprised."

The Scarpar will be far and away the most powerful vehicle of its type on the market. Speaking of the current competition, Fern says, "the best of them have like an 800 watt motor on them, and we're talking 3 kilowatts ... The motors themselves are the size of a coke can and they're just unbelievably powerful."
The new design has achieved a degree of water resistance, too: "The thing is going to be IP55 rated, which means you can bring it home and hose it. You can't go and submarine it, but it's pretty cool to have an electric vehicle that you can bring home and hose off. 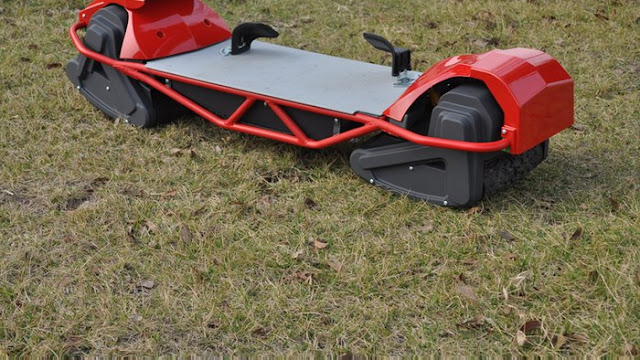