Radiomize aims to bring smart steering wheels to the masses 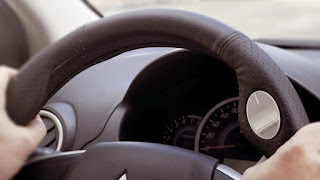 Radiomize aims to bring smart steering wheels to the masses


A new Indiegogo project wants to bring a tech-enabled, touch-controlled steering wheel to a car near you. The Radiomize steering wheel cover converts a standard steering wheel into a touchpad controller for a paired smartphone, safely adding connected car options to any vehicle.

The accompanying Radiomize app uses the phone's built-in technologies to provide infotainment, social access, and safety. Users can scroll through messages, control music playback, read the latest headlines and more using the Radiomize interface.
When the vehicle is in motion (detected via the phone's internal GPS and gyroscopes), the app automatically blocks the more distracting activities to prevent unsafe behavior. The safety systems in Radiomize are less pushy than those we've seen with other steering wheel-based controllers like the Drive system.
The Radiomize controller includes three modes: Radio, Drive, and Stop. Under Radio Mode, the touchpad's right button moves forward to the next song or news item and the left button goes to the previous. In Drive Mode, incoming messages are accepted and read aloud with a tap on either button. In Stop Mode, when the vehicle is stationary, messages can be scrolled through and replied to with either button.

Longer presses and double-taps on the controller also have a function, with a long press in Radio Mode controlling volume and a double-tap pausing and unpausing playback, or jumping between music and news. In Drive Mode, a double-tap skips incoming messages. Finally, a sliding gesture on the touchpad's body scrolls when in Stop Mode.
Other safety features include an SOS preset that allows the driver to create an SOS message that goes to up to five recipients. This message can be sent in the event of an emergency, along with location details. The Radiomize app also learns the driver's preferences during music playback and dynamically creates or customizes its playlists according to that behavior. News, music, and message types (including social media) can be filtered and customized as well.
Radiomize is an Indiegogo project looking to raise US$50,000 in order to enter production. A pledge of US$49 is required, which is 45 percent lower than the planned retail price. The design team is based in Melbourne, Australia and plans to begin deliveries in July and August of 2016 if funding is raised.