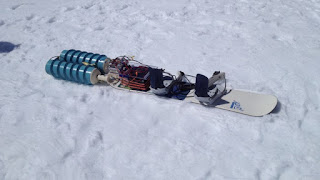 
Snowboarders endure a lot of issues when compared to their skiing counterparts – these include twisting and contorting their ankles to fit on footrests designed for skiers, wearing useless leashes around their legs even though skis are more likely to pop off, and getting stuck on flat traverses that skiers push through with their poles. All those issues aren't getting solved in a day, but a group of French students is working on the last one. Their solution is called the Propul~Surf and it's designed to motor knuckle-draggers over flat ground and up hills.

If the project works out, snowboarders will have their own board-specific answer to the Skizee. Judging by the video clip below, the Propul~Surf may never be as fast or fun as the Skizee, but as a school science project, it just needs to be a cool, working proof of concept. And it's definitely that.

The Propul~Surf is being developed by a group of high school seniors studying science and engineering at the Lycee Parc Chabrieres school in the suburbs outside Lyon, France. It is based on Archimedes' screw, a large screw for moving water from low to high ground popularly traced back to the 3rd century B.C. While the screw can take slightly different forms, they all carry water upward via rotating threading. In a time before modern pumps and plumbing, the Archimedes' screw helped in moving water for irrigation, post-flooding removal and other activities. In fact, the design was so simple and effective, machines based on the same principles are still used today, thousands of years later.

The Propul-Surf uses the basic Archimedes design to create forward momentum. The two screws located at the tail of the board are powered by small electric bicycle motors. As the threads rotate against the snow, they push the snowboard forward. Think about a screw being pulled out a power drill, only horizontally on the ground.
The students are still tweaking and testing the Propul-Surf, but their teacher Laurent Neau told us that the initial test data shows that the device can work both on flat terrain and up hills. He also said that it should work in all types of snow, and in the video below, you can watch it working slowly but surely in the heavy, wet spring slush that covers the French Alps at the moment.

The five students have been working on the device since last September and are preparing it for the Engineering Science Olympiad finals in Paris next month. Neau was unable to share all of the specifics, such as motor and battery ratings, because of the upcoming competition.
For now the Propul~Surf is just a high school science project, but Neau did mention the possibility of pursuing it as a market product if a manufacturer were to show interest. He said that the weight could easily be brought down between 9 and 15 pounds (4 and 7 kg) with more advanced components and design.
Whether or not the Propul~surf – or something like it – ever becomes a practical device, it's sure a lot cooler than anything I ever got to do in science class. 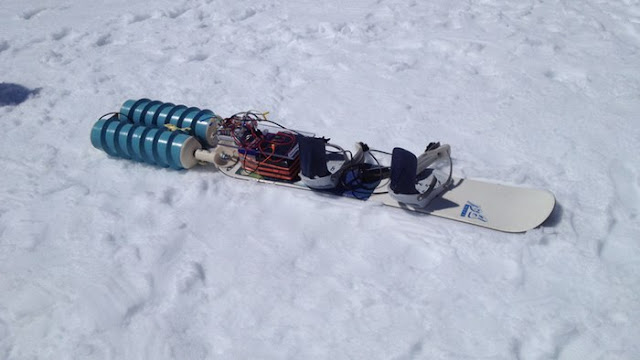