Nikon’s DL premium compact trio are all about their lenses 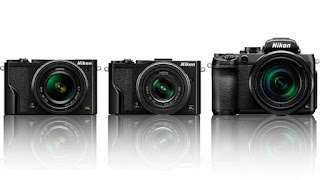 Nikon’s DL premium compact trio are all about their lenses


Nikon has finally decided to enter the market of premium compact zoom cameras with not one, but three new shooters. The DL trio share many specs including a 20.8-megapixel one-inch-type sensor, with their focal length range being the main distinguisher between them. One camera focuses on the wide angle, one has a standard zoom, and the other features a long super zoom.

It's surprising Nikon has taken so long to follow the likes of Sony, Canon and Panasonicin releasing a line of premium one-inch-type sensor compact cameras. Especially considering it's already has a premium fixed prime Coolpix A compact, and its own line ofNikon 1 mirrorless cameras use a one-inch sensor. However, what the firm lacks in speed to market, it appears to make up for in choice with three cameras being launched simultaneously.

The trio of DL cameras, which Nikon says stands for Digital Lens, are each built around the same core, and share a number of specifications. First of all they each have the same 20.8-megapixel one-inch-type (13.2 x 8.8 mm) CMOS sensor which is paired with Nikon's new Expeed 6A image processor.

This allows the cameras to shoot high quality JPEG or RAW images with an ISO range of 160 to 6,400, expandable to 12,800. They also have the ability to rattle off up to 20 fps (frames per seconds) with full AF performance, or up to 60 fps with fixed focus. The speed should also continue to autofocus performance, where a hybrid (105-point phase detection AF and 171-point contrast-detect AF) autofocus system promises accurate and fast focusing and subject tracking.
The new DL cameras can also shoot 4K Ultra HD (3,840 x 2,160) video at up to 30/25 fps and Full HD 1080p at up to 60/50 fps. Around back there are matching 3-inch OLED touchscreen monitors each with 1,037k dots, and built-in Wi-Fi and NFC are on hand for sharing content and remote control via SnapBridge. Users of Nikon's DSLRs will find the menu systems familiar, and the cameras all boast manual controls including various dials, and rings around their respective lenses.

The ultra wide angle 18-50-mm (equivalent) F1.8-F2.8 lens on the Nikon DL18-50 makes it well suited to shooting landscapes and architecture. As such, it is good to note that it benefits from Nikon's Nano Crystal Coat to reduce lens flare. In addition to optical vibration reduction, the DL18-50 also boasts Perspective Control capabilities, which will be of particular interest to architecture shooters.
The camera measures 106 x 63 x 57.5 mm (4.1 x 2.5 x 2.2 in) and weighs 365g (12.8 oz). While its touchscreen monitor can be tilted, there's no built-in viewfinder, with photographers having the possibility of using the optional tilting DF-F1 EVF with 2,359k dots.

For those who want a more standard zoom length the DL24-85 offers a 24-85-mm (equivalent) with a matching variable maximum aperture of F1.8-F2.8. In addition to the 4-step equivalent optical vibration reduction, the lens also has a Super Macro option giving users the ability to capture small subjects at life-size. When doing this, the focus peaking option (which is available on all of the DL cameras) will be of particular use.
At 104.9 x 61.3 x 49.8 (4.1 x 2.5 x 2 in) and 350 g (12.3 oz) the Nikon DL24-85 is marginally smaller and lighter than the DL18-50. It once again has a tilting monitor and the option of attaching the DF-F1 EVF via the hot-shoe.

The wide 24-500-mm (equivalent) zoom range of the DL24-500 makes it well suited to shooting a variety of subjects from travel to wildlife or sports. However, the variable maximum aperture ranges from F2.8 to F5.8 as you move from wide angle to super telephoto. The vibration reduction on this camera also benefits from a Sports mode which gives a stable viewfinder image during high-speed shooting.
To make room for that lens, the DL24-500 is not as compact as its stable-mates. Measuring 122.5 x 89.9 x 138.8 mm (4.9 x 3.6 x 5.5 in) and weighing 780 g (27.6 oz) it looks more like a DSLR. This is continued on the back of the camera where there's built-in EVF with 2,359k dots. The touchscreen is also slightly different in that it's vari-angle rather than just tilting, allowing more shooting positions.
All of the new Nikon DL cameras are expected to start shipping around June. When they do, the DL24-85 will set you back US$650, the DL18-50 will cost US$850 and the DL24-500 will sell for $1,000. 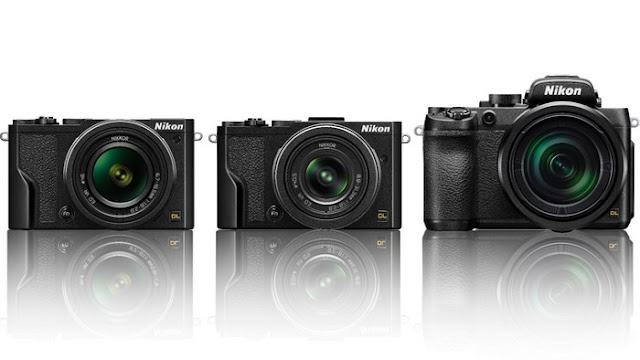