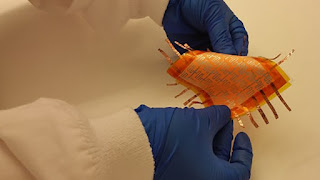 
Multipurpose sensors that are both flexible and wearable could one day be used for everything from monitoring the body's vital signs to changing the way we interact with computers. Working toward this goal, researchers in Saudi Arabia have used low-cost everyday items that you probably have laying around your house to develop a paper-based sensor that reacts to the same stimuli as human skin, such as pressure, touch and temperature.

While there are plenty of devices around that can track things like pressure, humidity andtemperature on their own, fashioning one that can replicate the various sensory functions of human skin has been a little more elusive. Some progress has been made toward more versatile sensors, but they have typically involved materials that aren't so easy to come by, such as gold nanoparticles and nanowire-based conductors.
Electrical engineers at the King Abdullah University of Science and Technology (KAUST) have built a sensor they claim can measure pressure, temperature, humidity, proximity, pH and flow in real time. And they have done so using what they describe as a "garage fabrication approach," that is, by combining aluminum foil, sticky tape, sponges and sticky notes.
These household items were integrated into a paper-based platform, which was in turn connected to a device to pick up on changes in electrical conductivity. To make this possible, the team says it tapped into certain properties of the materials, such as the porosity, adsorption, elasticity and dimensions. The sticky note was used to detect humidity, while coloring it with an HB pencil enabled it to detect acidity. Sponges were used for pressure and aluminum foil for motion.
Boosting humidity, for example, increased the sensor's capacitance. Exposure to an acidic solution increased resistance, while an alkaline solution lowered it. Voltage was altered in response to temperature changes, while bringing a finger near the sensor impacted its electromagnetic field and lowered its capacitance. The team found that the device was capable of detecting more than one stimuli at once in real time.
"This work has the potential to revolutionize the electronics industry and opens the door to commercializing affordable high-performance sensing devices," says Muhammad Mustafa Hussain from KAUST's Integrated Nanotechnology Lab.
The team is now working to overcome a number of limitations en route to developing a commercial product, with an initial eye on medical applications. For this to happen, the team says they will need to give the Paper Skin wireless capabilities, and also carry out reliability testing to ascertain how long it can perform when undergoing severe bending.
"The next stage will be to optimize the sensor's integration on this platform for applications in medical monitoring systems," says Hussain. "The flexible and conformal sensory platform will enable simultaneous real-time monitoring of body vital signs, such as heart rate, blood pressure, breathing patterns and movement." 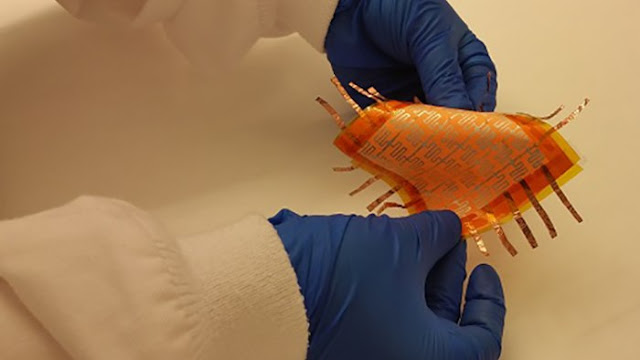