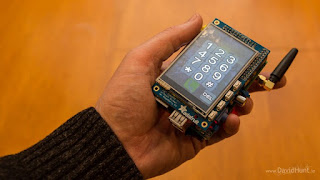 
Since its launch and slightly delayed shipping in 2012, we've seen Raspberry Pi computers used for everything from a bartender to robots to a bizarre musical instrument. Now dedicated tinkerer Dave Hunt has used a Model B to create a touchscreen smartphone called the PiPhone, though he readily admits that it would be easier and cheaper to pick up an (arguably much better looking) budget cellphone from a shop in the mall, "but hey, where’s the fun in that."

Software engineer by day, and photographer and Pithusiast in his spare time, Hunt paid US$158 for the off-the-shelf components for his DIY mobile phone, which included the Pi Model B, a 2.8-inch Adafruit PiTFT touchscreen at 320 x 240 resolution, a 2500 mAh Li-Pol battery, a SIM900 GSM/GPRS module, a DC-DC boost converter and various cables, connectors and switches. The cost of the prepaid SIM card installed in the PiPhone adds an additional €10 ($14) to the build.

After tapping the numbers on the touchscreen interface, the SIM900 module that's connected via UART to the Raspberry Pi activates and a pair of boom-packing headphones are used to converse with the call recipient. The custom code created in Python that runs the PiPhone has now been made available at Hunt's Github page. The phone icon underneath the keypad is pressed to make or end a call.
The DC-DC converter ups the 3.7 V from the battery to the 5 V needed to run the device, and two strategically-placed cable ties hold it all together. Hunt reports that installing the battery between the Pi board and the touchscreen does pose a bit of a heat problem, with the PiPhone running hot after a few minutes of continued operation. He also says that he's not tested the performance of the battery between charges.

The Linux software engineer says that he had a lot of fun creating his first working cellphone using a Pi Model B, but "it wont’s stay in one piece for long, I’ll be using those parts for other projects very soon." 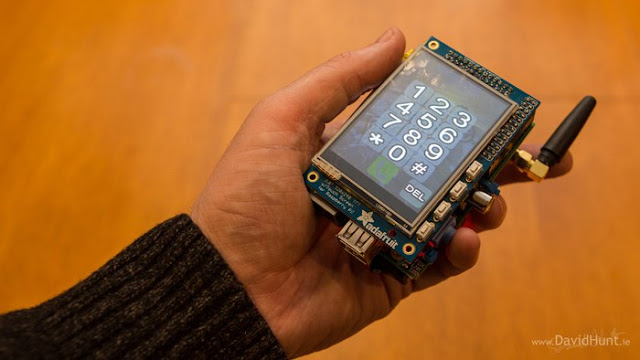