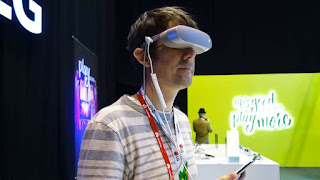 
At this year's MWC, most of the major phone makers are scrambling around to find ultra-cool accessories to make their handsets more appealing, from Bluetooth earpieces to360-degree cameras. LG, like Samsung before it, is betting that smartphone users would love a dash of virtual reality with their handsets, and we've been putting the LG 360 VR to the test in Barcelona.

These lightweight VR specs have a lot going for them right out of the gate. For starters they connect to a phone via a USB connection, rather than as part of the headset itself (see the Gear VR). That could mean compatibility with more phones (though it's only compatible with the LG G5 for now, it could expand to other phones later) as well as a lighter piece of gear on your head. Of course it also means the headset has its own built-in display.
While that cable does have the drawback of making mobile VR wired rather than wireless (which is, frankly, one of the only advantages mobile VR has over the more powerful VR options), you can still take your VR experience anywhere without dragging aWindows 10 PC or PlayStation 4 along with you. And the goggles are so lightweight it's tempting to see them as a more pocket-friendly alternative to the Gear VR and various Google Cardboard kits.

However, what you gain in one area you sacrifice in another. Our first experiences of the LG 360 VR at LG's press event weren't great, with the software regularly crashing and once or twice seeming to have a mind of its own, its sensors tracking movement even when my head was still while staring at a menu screen.
Despite looking great in pictures, the device itself feels a little on the cheap and flimsy side, with the eye adjustment dials especially feeling a bit low-end (one of them got stuck on one setting while I was using them). Audio is provided either through the phone's speakers (which will make for a lousy experience) or through your own set of headphones you plug into the jack on the LG 360 VR.
Picture quality in the standalone display was on the underwhelming side – not awful but light years away from what you get with the Oculus Rift and even some way behind the rapidly maturing Gear VR. What we did like was the simple two-button navigation system, and response times were quick enough to do justice to the 360-degree videos we watched.

Let's be fair to LG: we were using a pre-production unit at a press event that's got a couple more months of development to go, and chances are that a lot of these issues will get ironed out before you can actually buy the LG 360 VR in April. In other words, please stay tuned for our official review before passing final judgement on the specs.
But our shaky demo experience illustrates just why it's taken the Oculus Rift four years to go from Kickstarter to commercial product and why the best VR headsets need to be plugged into high-end PCs. Even as VR reaches the masses, there's a lot of technological wizardry going on behind the scenes to fade the tech into the background and make the user experience the best it can be.
You can certainly save yourself some money by opting for a cut-down VR experience (pricing on the LG 360 VR has yet to be confirmed, by the way), but bear in mind that – surprise, surprise – you're going to get what you pay for as virtual reality devices start to flood the market. 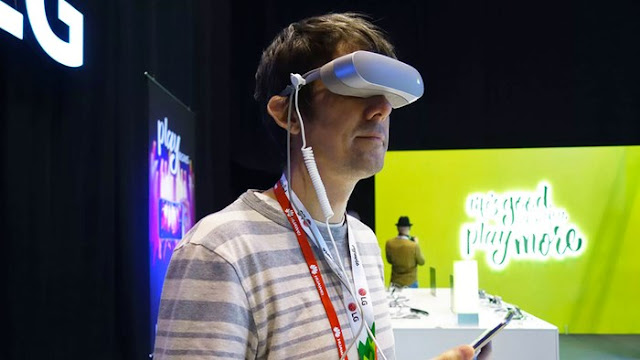