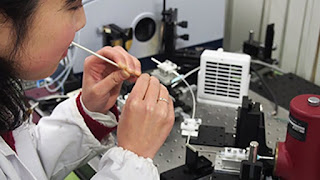 
For a number of years now, various research groups have been examining the potential for lasers applied to the skin to measure blood-glucose levels in an effort to put an end to the daily finger-pricks and meticulous blood sampling performed by diabetics. Japanese scientists have now developed one such system that differs from previous techniques by relying on far infrared light, which the researchers say is harmless and offers unprecedented levels of accuracy.


Other non-invasive approaches to blood-glucose monitoring that have been floated involve using near-infrared or mid-infrared light to scan a part of the body. As glucose in the blood soaks up light at specific wavelengths, the idea is that by measuring how much light is absorbed, it is possible to gauge how much glucose is present in the blood.
But researchers at Japan's Tohoku University say that near-infrared light has its limitations when used for this purpose, as not only is it absorbed weakly by the glucose, but water, protein and hemoglobin too, making it difficult to get an accurate measurement. They claim to have overcome this by instead focusing on far infrared light.
With wavelengths of around 10 microns, far infrared light is more strongly absorbed by the glucose. But on the flip side it only penetrates to a few microns beneath the skin. So in order to properly detect blood glucose using this method, the team was forced to come up with a new way to apply and measure its effects.
Their new device consists of flexible, hollow optical fibers that radiate far infrared light with a small prism attached to the end. By applying it to the inside of the mouth, where a mucous membrane lines the inner lips as opposed to the thick layer of skin found elsewhere on the body, the researchers were able to measure blood glucose levels with a less than 20 percent margin of error.
The lead researcher says this is accurate enough for clinical use, and that combining the technique with advanced far infrared lasers could see non-invasive blood glucose monitoring systems move out the lab in the near future. 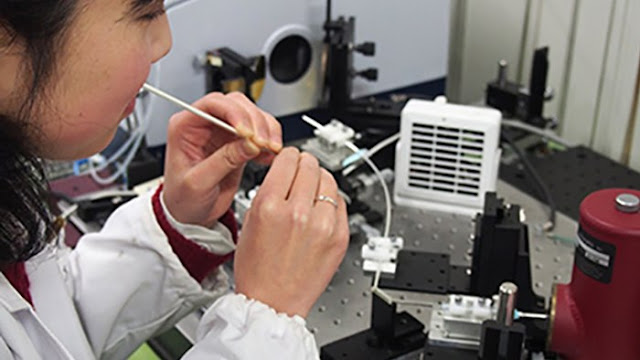