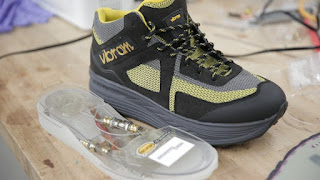 
Through energy harvesting tiles, backpacks and insoles, there has been much talk about harnessing our kinetic energy to power mobile devices and other electronics. A team of researchers is claiming to have made a big breakthrough in the collective effort to turn human motion into usable energy, developing a new method of producing useful amounts of electricity from our footsteps.

"Human walking carries a lot of energy," says professor of mechanical engineering at the University of Wisconsin-Madison, Tom Krupenkin. "Theoretical estimates show that it can produce up to 10 watts per shoe, and that energy is just wasted as heat. A total of 20 watts from walking is not a small thing, especially compared to the power requirements of the majority of modern mobile devices."
But drawing usable energy from these theoretical calculations would pose a number of challenges for Krupenkin and his team. Devising a harvesting technique that was practical for the "relatively small displacements and large forces of footfalls," in turn making power-producing footwear a viable possibility, has been an elusive goal so far, despite the promise of devices like the PediPower shoe attachment.
"So we've been developing new methods of directly converting mechanical motion into electrical energy that are appropriate for this type of application," Krupenkin says.
Reverse electrowetting is a technique developed by Krupenkin as a new approach to high-power mechanical energy harvesting. It involves a conductive liquid that interacts with a nanofilm-coated surface to produce electrical energy. He published a paper in 2011 reporting its ability to produce high power densities from a range of mechanical forces, but there is one caveat: it requires an energy source with a reasonably high frequency, higher than that produced by human motion.

So the researchers combined reverse electrowetting with a novel device called a bubbler in an effort to bridge the gap. The bubbler contains no moving mechanical parts, but is made up of two flat plates with a conductive liquid in between. In the bottom plate, tiny holes allow pressurized gas to enter, which in turn forms bubbles. These grow in size until they make contact with the top plate and burst. The rapid, ongoing production and bursting of bubbles washes the conductive fluid back and forth to generate an electrical charge.
The researchers say that this method can produce a lot of watts relative to the surface area of the generator, with the proof-of-concept device generating around 10 watts per square meter in early experiments. They claim that theoretical estimates indicate up to 10 kW might be possible. The shoes could be used to power mobile devices through a charging cable, be adapted for the military, or act as a power source for people in remote areas and developing countries.
"The bubbler really shines at producing high power densities," says Krupenkin. "For this type of mechanical energy harvesting, the bubbler has a promise to achieve by far the highest power density ever demonstrated."
Krupenkin and J. Ashley Taylor, a senior scientist in UW–Madison's Mechanical Engineering Department, have created a startup company called InStep NanoPower, and are seeking industry partners to commercialize the technology. They have already teamed with Vibram in develop a demonstrator shoe with the energy-harvesting technology embedded in the sole. 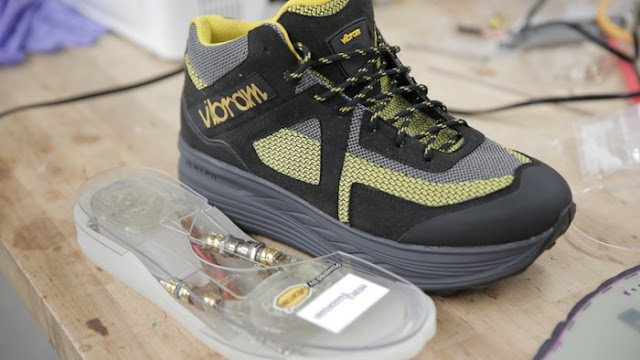