Home » news » KarTent designed to be recycled after the festival's over

KarTent designed to be recycled after the festival's over 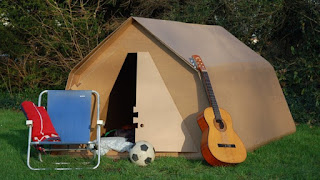 KarTent designed to be recycled after the festival's over


If you've camped at music festivals, you'll know that tents are often discarded afterwards for campsite crews to clear up. This is, obviously, incredibly wasteful. Recognizing this, a pair of Dutch designers decided that, if people are going to leave their tents, they might as well be recyclable.

After meeting at startup incubator Yes!Delft, Jan Portheine and Wout Kommer designed the KarTent, a cardboard tent designed for temporary use at festivals. We've seen this concept previously, but nonetheless, it's an unusual one.
The KarTent provides space for two people and their bags. It is guaranteed to stay standing and to keep users dry for three days of constant rain and is also said to stay cooler and darker on the inside than other tents due to its non-translucent material.
The use of a cardboard structure means that custom designs can be printed on the tent by KarTent when it is ordered or, alternatively, it can simply be customized with drawings at a festival. It also means that, after being used, the tent can be recycled and made into other paper or cardboard products.
There's no doubt that the KarTent is a pragmatic and clever idea created with the best intentions, but no discussion of it would be complete without pointing out that it will arguably contribute to the amount of waste left at festivals and, indeed, to a wider culture of disposability. Preferable as the KarTent may be to putting hundreds or thousands of conventional tents into landfill, more preferable still would be people simply taking their tents home with them after festivals.
The KarTent was tested at multiple festivals in the Netherlands last year and a modified version will be available at festivals in Belgium and the Netherlands this year, ranging in price from free (as a sponsored provision) up to €75 (US$83), though for that sort of money, you could buy a decent enough conventional tent.
The new model will have a pentagonal rather than triangular shape, making it it bigger inside, as well as two layers of cardboard for extra stability and waterproofing. 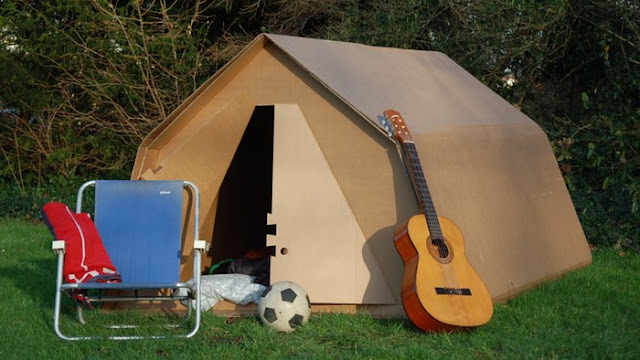