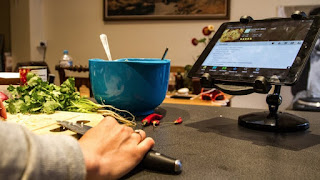 
Just as regular tablets have tried to muscle in on the popularity of magazines and books, recipe tablets, too, have their printed-and-bound counterparts in their sights. And with millions of recipes loaded onto splashproof, digitized pages, the Key Ingredient Recipe Reader HD+ does offer some incentive to leave the stained and dog-eared paper of your favorite cookbooks behind. But does this kitchen-specific tablet really offer anything that a regular tablet does not?

The Recipe Reader HD+ essentially serves as a gateway to Key Ingredient's extensive online database, home to around two million recipes. But with the Key Ingredient Recipe app baked in (along with a Unit Conversion and Kitchen Timer app), the idea is to put more recipes and inspiration at your fingertips than even the hungriest home chefs would know what to do with.

The 10-inch Recipe Reader HD+ runs on a customized Android Amazon App Store interface, with a 8-core 2.1 GHz processor, 2 GB of RAM and 16 GB of storage, which is expandable via an SD-card slot. It is designed to be kitchen-safe, meaning the 2,043 x 1,536 pixel display is sealed and splashproof should things get a little wild when stirring the Bolognese sauce. It also ships with an adjustable stand that can either be planted on the countertop or mounted to walls and cabinets.

Inside the Key Ingredient app, there's certainly no shortage of mouthwatering recipes to choose from, with Vegetarian Mexican Baked Eggs, and Chicken Enchilada Dip Rollups just a couple to catch our eye (sensing a theme here?). The app allows you to save recipes that you like and organize them into seperate cookbooks, and also favorite successful recipes so you can access them later.
There is also the ability to load your own recipes onto the tablet, either by typing them in manually or snapping a photo with the 13-megapixel rear camera or 8-megapixel front camera. Another reason for the dual camera is to visually document your immaculately presented dishes as they're served up.
The camera is serviceable, but the image quality does come through a little soft, so you'd probably do better to use your phone instead. Here's a comparison, with a photo from the front-facing camera on the left and the rear-facing camera on the right.

One of the seemingly more thoughtful features of the Recipe Reader HD+ is its text-to-speech function. On every recipe page, there is a small button that initiates a robotic readout of the text. Of course, busy cooks with grubby fingers don't have time to stop and scroll through recipes, so you can totally see why this would be a good idea.
But in practice, we found it to be pretty much useless. Once you hit the button, the tablet begins to instruct you through the first step in the recipe. And then quickly continues onto the next step, and the next one until it is finished. Even with supremely efficient slicing and dicing, trying to keep pace with the voice is an exercise in futility. You can press pause, but you'd need to touch the screen to do that, so you'd be headed back to square one. We reckon an ability to adjust the speed, or possibly even require voice prompts to continue, would make a world of difference here.

Another minor gripe is the arrangement of the recipes, which populate in no particular order. So when you open up the app, you might have one star recipes mixed with three star recipes to choose from, rather than beginning with top rated or more popular dishes. This top-down system is in place already on the Key Ingredient website and the company tells us they will be rolling it out on the tablet in the coming months. If it does then it will certainly make for a more intuitive user experience.
Our numerous forays into the kitchen with the Recipe Reader HD+ brought us some delicious and wholesome meals. Using the tablet while cooking is as straightforward as you'd expect, and the stand is a nice touch that makes using the thing a lot more comfortable than it would otherwise be.

But despite this we keep coming back to our original question, is it really worth shelling out for a dedicated cooking tablet? It does double as a regular tablet, in that it is perfectly capable of browsing the internet, accessing email and social media. And the specs are nothing to sneeze at for a US$250 device. But apps can only come from the Amazon App Store, with no access to Google Play, which does limit what you can use it for outside the kitchen.
So we aren't entirely convinced. You can access Key Ingredient's recipes on any device, as you can any number of other recipe apps or databases. So for us, bringing a laptop and a careful approach into the kitchen will steer us through to dinnertime just fine.
The Key Ingredient Recipe Reader HD+ is currently priced at US$250 with free shipping (includes stand). 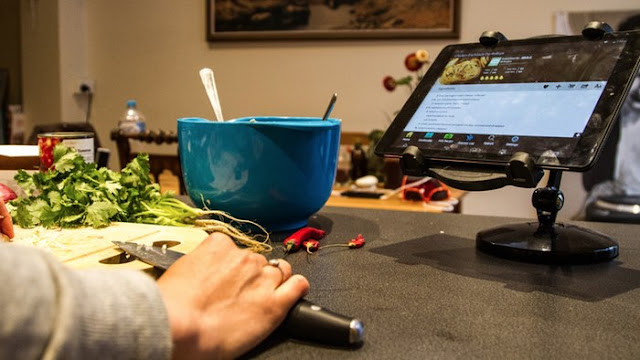