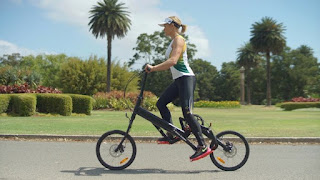 
Running may be a great source of exercise, but it isn't exactly a low-impact workout – in fact, many runners are injured by the repeating jarring of their feet against the ground. That's why Australian startup Run4 developed the Bionic Runner. It looks like a seatless bicycle and is designed to replicate the motion of running, but without the "hard landing" at the bottom of every stride.


When first seeing the Bionic Runner, many people may think that it's more or less the same thing as the ElliptiGO – which is essentially a two-wheeled elliptical trainer. According to Run4 co-founder Dr. Henry Thomas, however, there's a key difference between the two.
"We discovered that running was a four stage process of leap, recovery, impact and drive," he says. "The existing cross trainers were all elliptical in nature or step machines. None captured the motion a runner's leg makes when they move."
As a result, the Bionic Runner was designed to guide users through a mid-foot running gait, allowing them to engage the same muscles that they would when running on the ground – while also protecting their joints from over-exertion. Additionally, it provides a bit of lift at the "toe-off" of every stride, plus users are able to increase or decrease resistance by shifting it into higher or lower gears.

The device itself has a folding aluminum frame for transport in the back of a car, along with features such as dual mechanical disc brakes and an 8-speed Strumey Archer rear hub transmission. It weighs 18 kg (39.7 lb).
Thomas and co-founder Steve Cranitch are now raising production funds for the Bionic Runner, on Kickstarter. A pledge of AUD$890 (about US$745) will get you one, when and if they're ready to go. The planned regular price is AUD$1,490 ($1,250). 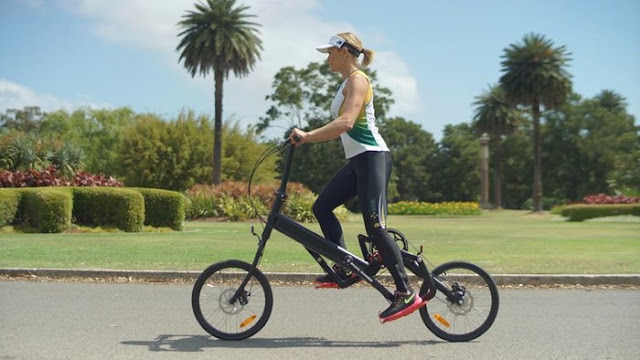